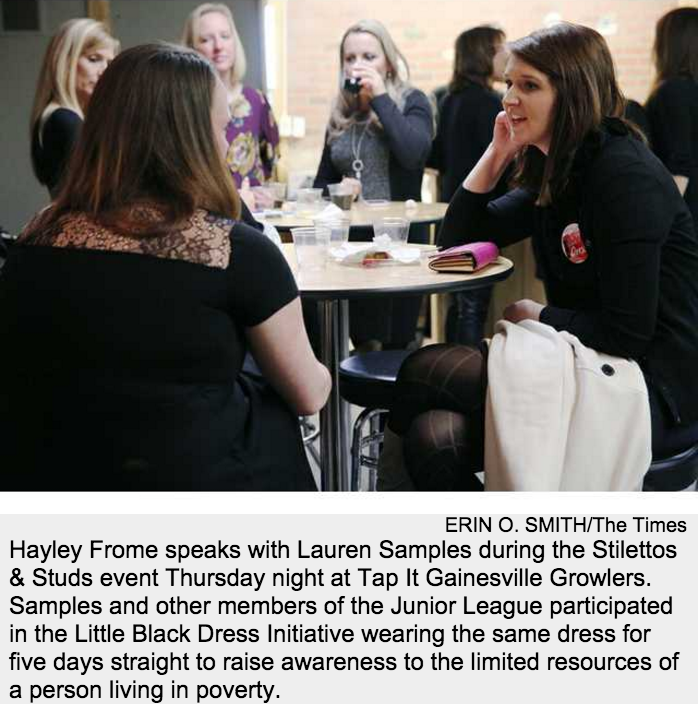 By Friday, their little black dresses may have been dirty or worn, but the effort raised more than $8,000 for families in need.

“Considering before we did this no one really knew what the Little Black Dress Initiative was, I think it’s gone really well,” said Havolynne Saxon, president-elect of the Junior League. “We’ve had a lot of responses from our participants posting on social media, and I think overall, it’s accomplished what we set out to do.”

The league set out to raise funds for Habitat for Humanity of Hall County and raise awareness of the limited resources available to people with limited income. The “little black dress” or similar black outfit, repeated every day, represents these limited resources.

Participants wore buttons that said “ask me about my black dress,” and Saxon said she was able to engage in numerous conversations with interested people, including co-workers and even strangers at the grocery store.

“I’m 8« months pregnant, and I had a doctor’s appointment Monday morning, first thing,” she said. “I went in with my dress and my button, and my nurse and my doctor both asked me right away about it. I was able to explain to them and share with them, not only about the Junior League, but about the issues in Gainesville and Hall County surrounding poverty and families with limited income.”

Most participants also campaigned on Facebook and social media, to raise funds for Habitat. By Friday afternoon, more than $7,500 was raised through social media alone.

“And today the donations are still just flooding in,” Saxon said Friday.

A massive fundraising and awareness effort was made in particular at Centennial Arts Academy in Gainesville.

“Some of the teachers, faculty, staff and students participated actually in the Little Black Dress and wore the same black outfit throughout the entire week to raise awareness about poverty,” said Randi Moore, Centennial teacher and league member.

Moore said the school had two “hat days” when kids could make a donation and wear a hat to school. Through student donations alone, $240 were raised.

Then Friday, they had a schoolwide blackout asking children to wear black to school to join the initiative on its final day.

“It was really sweet and really very heartwarming to see all the kids participate and actually ask questions,” Moore said. “They really cared about the whole fundraiser. For some of them, it hit home, and for others, it made them want to help out their friends. It made a huge issue we face an everyday awareness for children who probably otherwise would never have known anything about it.”

The campaign week will wrap Saturday with a free clothing drive at Centennial, 852 Century Place from 11 a.m. to noon. The first 50 people in attendance who need it will be given a food donation box from the Junior League’s Feeding our Future program.

Saxon said she believes the initiative resonated so well in the community because of local statistics.

According to U.S. Census Bureau data, about 18 percent of people in Gainesville and Hall County are below the poverty line.

“I think a lot of people have been genuinely interested and have found, like me, some of the statistics to be kind of alarming,” Saxon said. “People don’t realize there is such a high rate of poverty here in Gainesville.”

The league hopes to make the initiative an annual endeavor, and Saxon said they have plans to make it even stronger next year.

“I think next year and the coming years after that, as people become more aware and recognize it’s an annual thing, they’ll connect with it even more,” she said. “But it’s gone so well and I’ve enjoyed it. I think it’s a building, steppingstone for a much larger fundraiser for us and the community.”